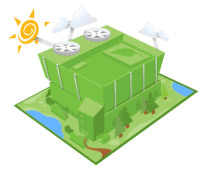 Now that cloud computing and Virtualization are being embraced by the industry at a rapid pace, IT environments are starting to grow in complexity at an alarming rate. This is compounded by the growing pressure placed on organizations to reduce the environmental footprint of their IT systems.

The recent developments outlined above means that companies, businesses, or large organizations need to find new ways to manage and monitor their infrastructure. Failure to adapt to the changes could result in businesses being caught off guard by problems that only surface once their users start complaining about downtimes.

For the cloud, organizations need to find a way to monitor and track the performance and usage of their clouds, and because there’s a possibility that not all organizations will move 100% of their services to a cloud service, they still need to devise a way to monitor several environmental factors, such as the temperature of their servers and the CO2 emissions of their IT shops. This lets them reduce costs on energy, and allows them to be compliant with new environmental targets that have been set.

Take The Pain Out Of Virtualization

The advent of virtualization means that organizations must now find a means of monitoring both physical and virtual networks effectively, due in part to the challenges inherent in implementing a virtual infrastructure. For example, while virtualization improves server utilization and frees up some datacenters for a different load, it can be difficult to know how the server will perform under the new increased load.

Like physical servers, monitoring the performance of the virtual machines and their VM hosts is crucial in order to avoid performance issues and downtime, but the problem lies in the fact that virtualization doesn’t behave like nor conforms to the same rules as physical machines, so traditional monitoring approaches to applications and infrastructure are not efficient.

For example, while the VM can be monitored, there is no data on what’s currently going inside them or the applications that they are hosting. In order to prevent these issues, organizations must study and employ new IT tools that will give them insight on what’s happening inside a virtualized machine. This requires a new investment, which is something that isn’t really considered as music to businesses’ ears, but without it, they will not be able to enjoy the expected ROI due to increased complexity and performance issues.

There’s no denying that a cloud-based infrastructure allows organizations to reduce costs on less IT equipment requirements due to its ability to move applications and services elsewhere, but cloud computing still presents a few challenges when it comes to monitoring and tracking of an IT infrastructure’s performance.

In order to guarantee performance, organizations need to start devising ways to monitor and track their cloud. However, there is a hurdle posed by the lack of standards around cloud computing when it comes to migrating applications between private and public clouds, along with the tools required to monitor them. This means an organization must choose tools that allow some sort of leeway and is flexible enough to be adapted to future changes once standards start appearing on the industry.

Another issue that organizations must watch out for is called “cloud sprawl”, in which the ease of buying additional services due to a cloud’s “pay as you go” model leaves them open to cases in which they are still paying for cloud services that they have long since stopped using. Effectively bleeding away money on cloud subscription bills just because they forgot to tell the cloud provider that they are finished with a certain service.

Green IT Made Simple

For example, the UK Government has already mandated the cutting of CO2 emissions to 34% of its 1990 levels, and has set 2020 as the deadline. Businesses are currently facing growing pressures to comply with the mandate and hit the target by the deadline.

Complying is difficult for companies that have migrated to the cloud, particularly because they have no idea how much power is being consumed by their IT now that the data centers are situated in locations far away from the organization’s main site. Adhering to the environmental requirements forces companies to start devising ways of monitoring areas no matter where they are located, so that they can identify where and how energy savings can be made.

The take out from this is that it has become increasingly important for companies to adopt new monitoring tools and practices as those that worked in the past no longer work in the more complex modern environment.