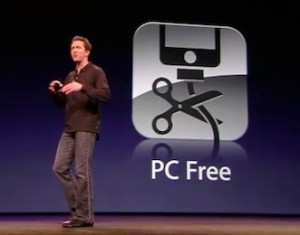 These past few years, there are a lot of people who are worried that we may be seeing the end of the PC market, even going so far as to coin the term “post-PC”, since PC sales are seeing a slow but steady decline, while portable devices such as tablets, smartphones, and ultraportables are seeing significant increases in sales.

There are a number of reasons why people (at least those who foretell the end of the PC segment of the market) consider the PC segment as nearing their end:

First is longtime Microsoft rival Apple, which has recently managed to capture not only 7.3% of the desktop market, but also managed to dominate the mobile and tablet markets, with their popularity eating away at the desktop space. Next is the fact that the desktop kings such as Microsoft, HP, and others are all being trounced by Apple and Google in the smartphone market, not even able to catch up to the two giants.

Another reason is that tablets, which are dominated by Apple and Google and are also heralded as the replacement for traditional PCs, are mainly targeted towards the cloud, which is largely emancipated from desktop PCs, making the large, immobile computer irrelevant.

Related to mobile devices’ reliance on the cloud – which lets users access their files from anywhere and from any device – is the burgeoning industry trend regarding BYOD, in which companies start to adopt policies allowing workers to bring their own device to work, and when a worker is going to lug along a computing device from home and to work, chances are she will choose a smartphone or a tablet, which is extremely light and portable, while desktop PCs are going to be left at home.

Down But Not Out

It’s true that PC sales are in a decline, but not so much that it could bring down the entire industry in the near future. In fact, year over year estimates remain relatively flat between now and 2014. If anything, we may be seeing a stagnation in the PC market with regard to sales. This is important: lack of improvement does not necessarily mean the death of a market. And the PC sector has a couple of things going for it:

First, PCs have specific strengths that are absent from portables, or at least, won’t be found in portables that don’t cost as much as a second mortgage. For instance, powerful hardware, which is needed for heavy data-crunching work such as animation, image and video editing, and even for games. You can get portables that have enough power to rival a desktop, but they come at a premium.

Next, Microsoft is about to launch their Windows 8, which will provide seamless interoperability between tablets, game consoles, and desktop PCs. This will help eat up on tablet market share, provided that Microsoft plays their cards right.

At the end of the day, while PC sales are seeing a decline, and are likely to drop further as more people get rid of their desktops in favor of portables, we’re still a long way away from the dreaded “post PC” era, as IT shops still continue to deploy PCs at rates similar to the past, and the desktop PC’s other role as a home entertainment machine will keep it afloat even if the work-related purchases have leveled a bit.

Keeping the Cloud in the Air