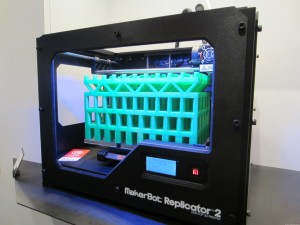 3D Printing was one of the key topics at SXSW in Austin, TX last week. Not alone due to the keynote by MakerBot CEO Bre Pettis. 3D Printing is being used mainly for manufacturing of various parts, to actual rendering of CAD output, and as a recent incident proves, can also be used to make and test pistols (the incident resulted in the 3D printing company canceling the project, but the designs and plans were viable).

But much like home printing was in 1982, 3D printing technology is still in that stage where it has grown past its infancy but still doesn’t have mainstream use, and so isn’t that exciting to the average consumer yet.

Experts believe that like home printing again, 3D printing technology is just waiting for one innovative company to come up with a product that will make the technology accessible and usable to the general public, and we’ll have 3D printing suddenly become an indispensable part of the industry.

Broderbund did it with their Print Shop software in 1984, which allowed users to print various entertainment and celebratory related items using their run-of-the-mill dot matrix printer. We’re thinking there’s a startup somewhere getting ready to release their own 3D “Print Shop,” or another software that’s equally disruptive.

Many may argue that 3D Printer history actually started in 1976, when the first inkjet printer was developed. It may well be true. 3D printing today uses the same process as inkjet printing. The only difference is the actual end product. 3D printing now carves the raw material layer by layer until it simulates the desired output in 3D.

This process is called stereolithography and was developed by Charles Hull.

In 1990, Hull launched what is generally accepted as the first SLA (stereolithographic apparatus) in 3D printing history. He released it through 3D Systems, the company he co-founded. They used a liquid called photopolymer as the raw material. The end products were far from perfect but it was a major breakthrough, nonetheless. The SLA proved that rapid prototyping may now be taken to the next level with the development of better quality raw materials. The machine also proved that intricate objects may now be printed.

3D Printing Through the Cloud

It seems that the catalyst that will give 3D Printing technology the chance to break through the mainstream isn’t software, but another piece of highly disruptive technology – the Cloud. Currently, there are companies such as Sculpteo that is offering 3D Printing services via the Cloud. What does it exactly do?

Imagine if instead of companies manufacturing parts or products in their factories in bulk and selling it to consumers, consumers can instead just buy said parts of products per piece through a company that will create a single one through 3D Printing? Now imagine if a person can actually design and render his own item, using tools and computing power leased by a service provider, have it printed and delivered? That’s basically 3D Printing through the cloud in a nutshell, or at least the idealized version of it should it mature enough.

The main process, at least in Sculpteo’s model, is for users to upload their ideas to be sculpted using the company’s proprietary cloud-based application. The beauty in this model is that 3D printing becomes so accessible that even people who only have access to a decent smartphone or tablet can have their ideas realized through Sculpteo’s cloud-based 3D printing services. Additionally, the company can also offer the services to other companies, giving said companies 3D modeling capabilities even without the requisite infrastructure in place.

A Cloud of 3D Printers

As young as the technology is, disruptive cloud-based 3D printing services are already in place.

There are several dominant 3D printer manufacturers in the world. MakerBot is one of them. Some of their units go for as low (or as much as) $2,000. It’s not a bad investment for companies that often need prototypes for their products. Car manufacturers, furniture designers are some that come into mind.

However, the cost could prove too much for small businesses, visionaries or new entrepreneurs that simply need to prototype their vision and turn them into reality to get funding and be used for presentations.

Safeway has an online 3D printing service with a twist. They have a network of people that own 3D printers in different parts of the world. People who want their product printed can submit their design and their address and be able to access someone who is near him and has a 3D printer. The result is faster turn-around time and lower cost for delivery and insurance.

A Cloud of Talent

Probably the best part in all these is the fact that these people who have 3D printers also offer CAD services or other software services. Designers who can only draw but can’t convert their drawing to a 3D file can ask 3D printer owners to convert their design to 3D.

It makes prototyping easy, fast and affordable. Now, architects don’t need to manually build a miniature of their building designs, they can simply print it.

The Future of Cloud-based 3D Printing

Suffice to say that it’s just a matter of time, and that the future of cloud and 3D Printing is bright, with the latter taking advantage of the convenience and cost efficiency of the former in order to jump through hurdles that have prevented it from making a breakthrough in the past. With enough fine tuning from companies like Sculpteo, 3D printing may do for manufacturing what Paypal did for online payments in the past – made it more accessible and viable to mainstream users.

45% of Networks Will be Obsolete in Next 5 Years