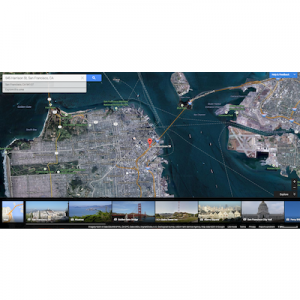 Google Maps is, perhaps, one of its most influential and groundbreaking services developed by Google.  It’s up there with search and email. Suddenly, the world knew where to go without having to roll up their window to ask someone for direction.

In true Google fashion, they have been upgraded  and evolved in baby steps through the years. Last year, Apple’s maps proved to be a worthy competitor but only after a major facelift. Although Apple Maps are certainly a product exclusive to apple users, it still brought up the question of whether or not Google will innovate fast enough to stay the leader.

It seems it has.

Undoubtedly, the draggable feature is what spelled the all the difference and the fact that it works near perfect became the “experience” to beat. It was enough for a while but the development of new maps services made it almost necessary for Google to reinvent. The direction naturally went towards merging social media, map data and customization without losing the whole purpose of why Google Maps was created, to get people from point to another in the most efficient way possible.

The visual is stunning. From the old map that loaded in “boxes”, the new interface loads faster and the visual is smoother. This may be credited to the fact that the Google is now using vector and streams the data to the user through the Graphical Processing Unit or GPU.

However, the “beauty” of the images and the much smoother look is not the most important development. The key is in personalization. It used to be when all the 100 million monthly user of Google saw one map containing the same data. Google employed the assistance of Google Earth because it knows that computers and mobile phones  are now equipped with better memory and better processing units that will allow it to utilize resources like Google Earth without running slow.

The ability to customise is further strengthened with the floating search bar. The user may be perpetually present in the user’s screen. It hovers over the map being viewed (it may be removed) which makes it more convenient for the user to pull in more data.

It may sound like the hovering search bar incredibly limits the view but Google now employs a full screen view of the map which means the overall screen is enlarged.

When a user searches for, let’s say, the nearest library or the nearest park, the information is layered over the map.

The value however is the amount of data one will receive. Aside from seeing the actual route, the user has the option to pull different information including bike routes, public transportation, and relevant information that could affect one’s travel going to the desired destination. The data is also incredibly detailed that it even includes time of train arrival, time of bus arrival, places where to pick up taxis, and others.

Although all these may now be accessed too in the current Google Map version, the 2013 version will allow for all these to be had in a single click. This is primarily due to all the data collection that Google has been doing all these years. If you access the map while logged in, they can pull in all the information you have accessed all these years and push the most relevant information to the user.

These data is also presented in the simplest of ways, over the map with brief description. Users will also have the option of pulling relevant searches such as recommended restaurants and other places of business. These recommendations are again, based on the user’s searches, and on the recommendation of people within the user’s network.

As previously mentioned, Google maps now integrates the technology of Google Earth. Google now feels this is possible and practical since technology has made it possible for almost everyone to enjoy Google Earth.

This means that people using Google maps will see more vivid images, 3D to be precise, that is pulled by Google Earth through its satellite. This means Google Maps users will be able to see details of the streets and explore the roads and places realistically. They can even zoom out and view the outer space or the Earth.

Several weeks ago, Google engineers witnessed an eclipse that was visible near Australia. Such details and update are all now possible through Google Maps. This is possible through WebGL, a software that builds the image on the fly to the browser. No downloads are necessary which results to faster processing of requests.

Then there are little things that may seem insignificant but when added together compound to a bigger and better experience.

The ads are well integrated into the map. It may appear through recommended content. When one searches for an Italian restaurant, they could push ads relevant to your search and it is clearly marked an ad.

It certainly doesn’t take away from the overall experience.

Naturally, there are more issues that will come up but Google is no stranger to that. Their Google Earth has been marred by privacy complaints left and right. They will battle such an issue with this version as they have in the current version and with their other products.

The legal issues may not be relevant. The question is whether or not Google can create a real personalized experience.  Google is using data is has collected in the past and data it will collect through user queries to push information. Its intelligence is limited by the intelligence of its machine. Whether or not those data will be enough to provide the user the information it really needs or wants will be remain unanswered until the product is launched to the market.

The Future of Mobile: It's all About Services – GigaOM Mobilize Review