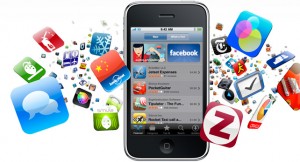 According to the report, approximately 61 percent of all Americans now have a smartphone mobile subscription in the third quarter of 2013. Smartphones with a screen larger than 4.5 inches were accounted for 28 percent of all retail sales in Q3, compared with 11 percent a year earlier. The growth in the use of these smartphones contributed to the growth of mobile data usage in the U.S. with a 19 percent increase year-on-year.

The correlation between larger phones and greater data usage would seem to point to a higher rate of engagement. Larger screen users use their smartphones for greater usage of social media, navigation, video, retail, and music apps. Facebook, Google Maps, YouTube, Amazon (retail), and Pandora Radio. Social media is the most popular with larger screens users, followed by navigation, video, retail and music.

Part of this trend can be attributed to the fact that most mobile manufacturers are releasing flagship phones with screen sizes larger than 4.5 inches. Samsung’s Galaxy line of phones helped popularize bigger screen sizes, which was later carried forward by Motorola, HTC, LG and others.

Network operators in particular are going to be more than happy to stock such devices and lean on manufacturers to adopt the trend if larger displays lead to increased use. OEMs are poised to continue increasing the product assortment and availability of smartphones with larger screen sizes in the coming years. Even though today larger screens represent a smaller part of the market, their relevance is increasing as consumers look for more ways to interact with content while on-the-go.  This is a win, not only for the manufacturers, but also for the carriers as data consumption and usage will keep increasing, says the report.

Forrester Research annual report predicted that mobile software and mobile apps grows in an impressive way as consumers are now more inclined to tablets. Tablets market will grow by 36% this year with a turnover of $21 billion, dominated by Apple, Samsung, and Microsoft. CIOs and IT decision-makers plan their biggest software spending increases in mobile applications in coming years.

Companies feel confident in their ability to handle this explosion of information, but prior experience of storing and analyzing large amounts of ‘big data’ may lead them to underestimate the additional talent and skills needed to spot new uses and revenue streams emerging from it.