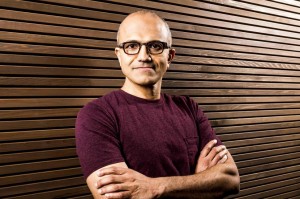 The news came out last February 4 as he addressed the employees as the new CEO in the presence of outgoing officer, Steve Ballmer and company founder Bill Gates. The event took place in their office in Redmond, Washington.

Nadella said in his first announcement as CEO  that he has his mind focused on “mobile-first “ and “cloud-first” projects.  He has his efforts directed towards getting at par with the company’s tight rival’s Amazon, Apple and Google. Microsoft’s primary business plan at the moment includes continuing to provide efficient Internet software and services, plus to create a growing ecosystem for its cloud and mobile devices.

“We need to be able to pick the unique contribution that we want to make. That’s where our heritage of having been the productivity company … is what we want to get focused on,” Nadella said.

Bill gates, on the other hand, will now play the role as Nadella’s close adviser as the former takes on a more hands-on position. Gates will put his mind on developing new products and technology, and will remain as part of the company’s board.

It would be remembered that Nadella pioneered Microsoft’s distant server applications where the company’s customers can subscribe to cloud centers for data management.  Also in the bag is the new CEOs task to close the $7.3 billion acquisition negotiation with Nokia. Analysts also predict that with Nadella as CEO, they see Microsoft merging Windows RT OS and Windows Phone in the near future in developing lightweight tablets.

For his track record, Nadella has been named as one of the key persons in fast-growing and most-profitable server and tools businesses. In fact, he led Office server and tools company its 20 billion dollar annual revenue in just three years. Microsoft people hope that Nadella can do the same and maintain the company’s momentum in the cloud business, and all this for a targeted $18 million pay package and a $21.8 million stock award.

Currently, Azure and the Office 365 software subscription have been driving the revenue for Microsoft as it doubled the customers in the early quarter of this year.

“Our industry does not respect tradition – it only respects innovation. The opportunity ahead for Microsoft is vast, but to seize it, we must move faster, focus and continue to transform. I see a big part of my job as accelerating our ability to bring innovative products to our customers more quickly,” Nadella said.

How SMBs Can Benefit From Cloud Marketing

With Machine Learning, Amazon Wants to Multiply the Power of Big Data