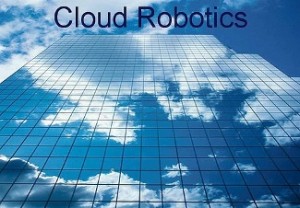 Cloud computing is one of the tech buzzword of the decade, and can be considered another IT revolution since the time the Internet was discovered. The reliable and fast connections have also changed the way people connect and communicate.

The rise of the cloud robotics also known as brain robots may have yet another major influence on how people live their lives. The partnership of brain robots and cloud computing may be seen in many different ways. It could be another way to make life easier or it could also be a threat because people may lose their jobs for a brain robot.

In the last InnoRobo Summit held in Lyon, France Willow Green Robotics launched their new product the Heaphy Project. This robot is special because it hopes to push “computation into the cloud” using the brain robot technology. In the past, traditional robots would usually require huge amounts of computing power and excellent performance to perform complex tasks.

Tim Field, Heaphy Project founder said, “For the vast majority of processing, you can do that anywhere. It doesn’t need to be local to the robot. If you have a fast wireless connection then you can send images, 3D data, control… all the processing can be done in the cloud.”

Today, however, there is no need for large computing power requirements because everything can be offloaded in the cloud. The cloud platform can perform heavy-duty tasks and store large amounts of data on an off-site server. These features are actually now running on Apple’s iPhone through its Siri feature that performs its voice recognition application.

“Heaphy is primarily a tele-operation interface, which allows anyone in the world to operate a robot,” Field said.

Heaphy Project works through Amazon Mechanical Turk where remote robot operators are hired. They are to undergo a two-hour training where they will be taught to manage and control real and live robots. The remote operators are to use the robot’s eyes to manipulate the arms so it can perform tasks such as reaching for a cup, taking the trash or emptying the clothes dryer. These tasks are done and made possible through the control of a remote operator that is connected to the cloud via the robot sensors. Fields calls this system the “human in the loop,” which functions like a human intelligence.

There are other companies that are developing cloud robotics’ capabilities like speech recognition, path planning, language translation, 3D mapping and many others. In fact, Goggle is designing and developing a project that is first of its kind, “the self-driving car project,” which is going to be operated by a brain robot. Android also released Android-powered mobile robot software called the “cellbot.”

There are numerous advantages with the use of the cloud robots like cost savings, smarter robot tools, ability to have a knowledge-based data for robots, continuous evolving of performance, accessibility and flexibility. There is, however, a downside to it, because it may take away some of the jobs that are previously performed by human hands.

Humanoid Research Group head, Kazuhito Yokoi of Japan’s National Institute of Advanced Industrial Science and Technology (AIST) said, “The next generation of robots needs to understand not only the environment they are in but also what objects exist and how to operate them. Cloud robotics could make that possible by expanding a robot’s knowledge beyond its physical body.”

Director of research at France’s Laboratory of Analysis and Architecture of Systems, in Toulouse, Jean-Paul Laumond said, “Coupling robotics and distributed computing could bring about big changes in robot autonomy.”

Singapore’s 3D Robot Models – Researchers at ASORO Laboratory are developing an infrastructure where robots can do mapping, simultaneous localization and SLAM on the cloud platform.

LAAS – Jean-Paul Laumond, Florent Lamiraux and other colleagues are developing robotic object databases that will perform simple tasks like opening a door. They hope to design software that will make complex tasks as simple for the robot to manipulate through the use of a user manual.

Italy’s iClub – Giulio Sandini, the project leader and professor is the brains behind this project, which continues to be developed at Italian Institute of Technology.

Cloud Robotics is still very new and has to undergo a long series of designing and developing. There are still many obstacles to be dealt with before it goes to the mainstream, but, it also has a very fascinating and thought provoking potential that arouses the mind on what it does and what it can do in the future.

“I think it only happens through extended periods of experience with a product. If you’d asked people 10 years ago if they’d store all of their photos, all of their documents, all of their e-mail online, they’d say, ‘No way, I want that on my hard drive.’ So I don’t think there’s anything that you can do except build up trust over time,” Field of the Heapy Project said.

VMware Makes Big Bet on Its Own OpenStack Distribution