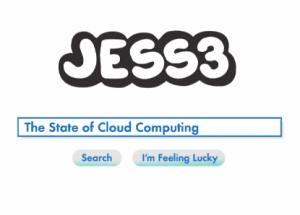 JESS3, a creative company that specializes in data virtualization, launched today “The State of Cloud Computing” microsite showing the history of cloud computing and the growing sector.  Amongst the Cloud-based brands mentioned: Skype, Dropbox, YouTube, Wikipedia, Yahoo, MSN, Gmail, Farmville and Twitter. The three-minute video is funded by Salesforce.com; a company which specializes in enterprise cloud computing; and  highlights the staggering investment in cloud-based businesses from: $25.7MM in 2005 to $374.8MM in 2009. The microsite also serves to aggregate and visualize conversations and links about cloud computing based on relevant keywords and the hashtag #SOCC on Twitter.

JESS3 is a creative interactive agency that specializes in social media and data visualization.  JESS3 continues to push the limits of what creativity and storytelling mean, providing services that range from UI / UX, animation and social media strategy to developing large-scale installations, brand strategies and infographics for clients that include Samsung, Nike, Facebook, NASA, Microsoft and Google. JESS3 also has a dedicated Labs division, which funds and launches its own products. Headquartered in the Washington, DC area JESS3 has team members in more than a dozen cities, in ten countries, on several continents, which allows the company to draw from a diverse set of resources and time zones to deliver for its clients.

BI, Cloud and Mobile will Drive IT Spending in 2013