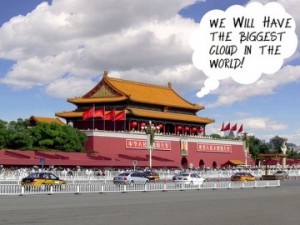 Cloud computing has grown at a tremendous speed over the last two years and it continues to build up speed. It is currently dominated by American companies such as Google and Amazon as it helped other businesses to flourish and grow. Cloud computing has penetrated even the medical industry as more hospitals are migrating to the cloud to improve their patient care services. China, however, intends to dominate this arena like how it did with other industries. China being the country that is least affected by the global economic crisis announced its target to rule the cloud.

Beijing is on its way to go “big time” on its plans to follow the trending for the cloud. To begin the movement, China built a 7,800 square meter complex on the key city of the south. The complex was built to provide cheap office spaces for firms and to employ 1000 people to make the cloud developments. The government has also placed a tax break for the 13 firms who joined the group, so they could focus on their cloud infrastructure.

The complex will be used as China’s cloud center to be called as “Cloud Valley” that invokes the impression as that of the Silicon Valley that is found on Huangshan Mountain. The mountain was associated with peculiar wind-shaped rocks and ancient old trees, which was believed to be the home of China’s legendary dragons. The name “Clod Valley” resonate a similar attraction like that of the Silicon Valley that has given it special attention from the media and has earned them at least 1,000 cloud server purchases.

Cloud computing is a unique technology that provides work and access for users, but does not require a physical server or data storage. It also provides software for computation, virtual data center and other work related services. Example of this service is found in Google Docs that make files and documents easy access and sharing for users from whatever gadget they use and from wherever they are.

As a result of this promising scenario, the Cloud Valley continues to receive financial support from major private companies. IDC has predicted that in the next 5 years China will have majority of shares at 2 trillion RMB from IT investments alone. According to IDC this is expected to balloon by 30% by 2012.

More cities throughout China are following the lead from Beijing; cities like Shenzhen, Shanghai and even the far cities of Inner Mongolia are readying for the cloud. Beijing, however, is not to be outdone for the capital city has outlaid its plan to create 50,000 jobs by 2015 from the cloud industry.

China differs from American firms in terms of how they run their cloud platform, but they are both influenced by the countries’ political and cultural behavior. American companies favor running public cloud servers while Chinese firms want the traditional private control. This information is from Eric Dong, Supercloud’s   head of product marketing, one of China’s biggest cloud companies.