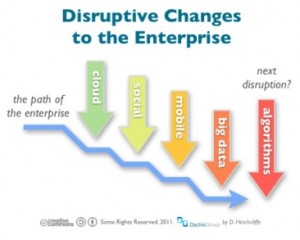 Two studies made by SAP and Microsoft brings light to the long standing economic crisis as cloud computing creates jobs and fuels the business market. Sand Hill Group who conducted the study said that the trendsetters for cloud computing will be the mobile cloud, data storage and social networking. The group said that the influence of these platforms may outrun the opportunities created when the Internet was introduced several years back.

In the US alone, cloud computing has already provided thousands of job opportunities that gave hope to people who were badly hit by the recession. It also shows a very promising future for the IT industry and various companies who will maximize the cloud computing services. This cloud trend, however, as promising as it is also presents some risks for users, providers and vendors.

The SAP study revealed that 11 cloud companies added more than 80,000 jobs in the US alone at the height of the economic crisis in 2010. The 11 companies who participated in the study were Amazon, Netfix, Google, OpenTable, SuccessFactors, Salesforce, Taleo, NetSuite, RightNow, Concur and Intuit. The total number of employees hired from 2010 to 2011 rose to 27%.

Results of the study also provided the figures that showed cloud company growth in terms of market revenue. First on the list is OpenTable that recorded 44% of growth followed by VMWare that had 41% and then Amazon with 31% earnings. The projection in company growth and revenue in the next 5 years will be at about $20 billion annually. In addition, startup ventures and infrastructure investments are estimated to generate about $30 billion revenue in the next 5 years. This company growth and market revenue is translated to thousands of jobs globally.

In relation to this, IDC, another research firm conducted their own study that looked closely on the economics of cloud computing. In that study they mentioned a huge 14 million job opportunities around the world will be generated in a very short period of 3 years.

These jobs will be combination of IT opportunities and non-technical tasks outside of technology requirements. Cloud computing will tap various areas of work from sales and marketing, customer support, administration and Human Resources, finance, production and delivery of services. There will also be new job categories that will be created from the cloud like “customer network facilitator” or “virtual resources administrator” positions.

IDC projection like the Sand Hill Group also projected skyrocket figures from cloud computing. IDC estimates that within the next 3 years cloud revenue may reach $1.1 trillion annually. These developments are good news to both the business sector and the employment section of the company.

Another area that will have a remarkable influence on the market share and revenue will be the cloud consumer’s buying behavior. Sand Hill’s figures showed that there is a projected $625 billion savings for companies who decided to migrate into the cloud.

In addition to the figures presented by IDC and Sand Hills, there are megatrends that will control and decide the movement of cloud enterprises. They are:

Mobile Cloud – this is the key contributor on the cloud trend as mobile computing continues to create steam through the evolution of tablets and smartphones. These gadgets are now considered necessities as they become useful for both business and personal activities.

Social Cloud – as people become more connected it has generated another area to do business in the social networking sites. The social cloud successfully integrated personal lives with business opportunities.

“Such massive scalability and elasticity would not be possible without cloud computing technologies to drive these sites,” Sand Hill report.

Cloud Data Storage – as cloud computing continues to thrive it will also continue to raise the demand for huge data storages and hosting platforms that will impact business strategies and consumer use.

“Cloud infrastructure and platforms will play a huge role in accessing, processing, and analyzing such massive amounts of data. This is where cloud-based systems shine,” Sand Hill information.

There are other factors that will influence the cloud computing trend like the government policies in every region and the purchasing behavior of cloud users at all levels. These influences, however, will not be as outstanding as the dictate of business economics and employment generation from the cloud.

The federal government’s thrust according to Sand Hills is a “federal government that is leaner, more agile and more efficient. Leveraging commodity IT services at the department level within agencies presents quick win opportunities, and is typically less complex to implement and easier to manage than efforts between agencies.”

Although this will take a very long process to take it is safe to say that slow, but steady efforts are being taken to address the current government IT inefficiencies. These inefficiencies are generated from the low fund utilization, differences in resource demands, redundant systems, long procurement process and many other issues. The role of cloud computing and the future of IT will ensure that the government’s ability to serve the people will be significantly improved.

Businesses and consumers are now enjoying the benefits of cloud computing, so it is about time that this trend had an impact with the way the government provides their service. Cloud computing is seen to improve the federal government’s resource utilization, improved response time, efficient benefit’s appropriation, enhanced agility and resourceful innovation facilities. In the end, cloud computing will shape how government, business and individual lives operate.

Truths about Cloud Computing People may not Know

Gartner Report: Five Trends in Cloud Computing that will Impact Your Technology Strategy