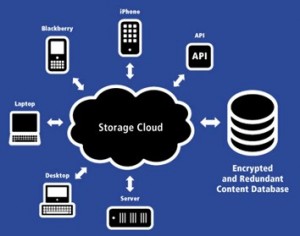 The big name Cloud storage providers, such as Google Drive, SugarSync, and Dropbox are currently changing how consumers deal with content, and they’re changing it quicker than users are used to. But it’s not a negative change, as the ability to access their files from any internet capable device allows them to be more productive and organized. It’s a very appealing service: for a small amount, cloud storage will simplify your life.

However, each cloud storage provider has its own set of rules and policies, particularly those that specify restrictions on what you can or can’t store on their servers. Microsoft’s SkyDrive is one of the more restrictive services out there, as exemplified by the following excerpt from their Windows Live code of conduct:

You will not upload, post, transmit, transfer, distribute, or facilitate distribution of any content (including text, images, sound, video, data, information or software) or otherwise use the service in a way that:

The above issue is made worse by the fact that SkyDrive is connected to your Microsoft account, so if MS suspends your Skydrive account, you’ll also lose access to other Microsoft services, such as Outlook, Windows Phone, and even Xbox 360’s online functionality. It’s bad news when a policy that can cut off a lot of services that you depend on is extremely strict and can be misinterpreted.

Another bad news is that Microsoft is pushing for everyone to use SkyDrive in Windows 8 and Office 2013. SkyDrive is so deeply integrated into their OS and office suite that it is very difficult to opt out. It’s not example to find yourself locked out of everything just because you’re writing a novel with too many swear words and accidentally saved it on SkyDrive.

According to a Microsoft rep, their intent is to prevent illegal, such as child pornography, from getting shared around the web via their services. It’s a noble idea, but they should at least revise their code of conduct in order to make it more specific and avoid a lot of “false positives”.

The Box spokesperson admitted that he isn’t comfortable answering the question, but he pointed out a specific part of the company’s TOS:

You may not use Box in any way that violates applicable federal, state, or international law, or for any unlawful purpose.

Dropbox’s rep is also uncomfortable with the question, and like the Box rep, pointed out several lines in their TOS, DMCA policy, and acceptable use policy, basically confirming that there are no content restrictions provided that you are not breaking any laws.

While Google Drive’s policies are not as ridiculous as Microsoft’s, they still have a very strict set of policies regarding content. Google Drive does not allow sharing of content that includes sexually explicit material, bullying, violence, and more. Like dropbox and box, Google will allow a file as long as it is not breaking any laws. HOWEVER, if another user reports your file, they would have to investigate and it is their discretion on what to do from thereon. Basically, you’re allowed to store legally owned porn on Google Drive but when another user reports it, Google will investigate and may or may not rule in your favor.