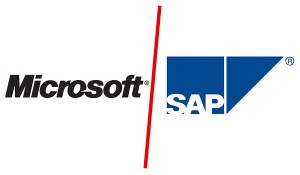 The long-standing partnership between Microsoft and SAP will be significantly increased in the areas of cloud, data, and mobility. In addition to the arrival of SAP solutions in the cloud Azure, the two companies are working on a better integration of Business Objects BI tool with the Power of Microsoft.

It is expected by the end of the second quarter of 2014, the SAP Business Suite software, SAP Business All-in-One solutions, the SAP Mobile Platform, SAP Adaptive Server Enterprise (SAP ASE) and the Developer Edition support the SAP HANA platform will run on Microsoft Azure. In addition, customers and developers using the SAP Cloud Appliance Library tools can implement a number of preconfigured SAP solutions within minutes directly in Azure.

New and existing SAP customers will be able to use the “pay per use” model of Azure to reduce infrastructure and total cost of ownership. Users will have access to the computing power of Azure to support SAP solutions and can scale computing resources according to their current needs quickly. They pay only for the resources used. Microsoft will provide support for customers if a problem arises infrastructure level, while SAP will take over if the issue involves an error at the application level. If the problem cannot be immediately targeted, SAP and Microsoft will work together to solve it.

The two companies also announced the upcoming availability of better integration between Business Objects BI for Excel and PowerPoint, as well as a next version of the SAP gateway linking SAP applications and Office 365. So customers should be able to automate business processes, and access Microsoft Office 365 and Microsoft Azure to SAP applications and data. Office 365 recently got a facelift to meet the advantage of social, big data and cloud computing. Microsoft is adding software, development tools and functions to Office 365.

This agreement has positive implications for Microsoft and SAP. SAP is trying to expand its mobile and cloud capabilities with a partnership with Microsoft, while the latter is exploring its credibility with SAP enterprise cloud. Under the leadership of Satya Nadella, Microsoft is trying to maintain the momentum of the company in the growing field of cloud computing as part of its “Cloud First, Mobile First” strategy.