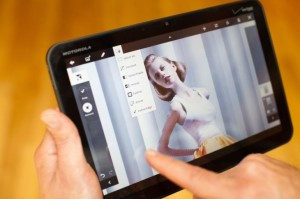 This week Adobe unveiled six applications designed with a touch interface that will run first only on tablets using Google’s Android operating system.

The Touch Apps for the Android market, which include the first touch version of Photoshop, are bound together by a service called Creative Cloud that synchronizes creative work across a broad range of devices.

The apps address multiple areas of the creative process including image editing, ideation, sketching, mood boards, wireframing, and presenting all of that work to clients.

Here a quick look at the new apps:

Adobe Collage
This app lets you capture ideas and concepts by combining images, drawings, and text into conceptual moodboards.

Adobe Ideas.
Similar to the app already available for iPad and iPhone, Ideas for Android is a vector-based drawing app where you can design virtually anywhere using vectors, layers, and color themes

Adobe Kuler
Kuler is an app for generating and sharing color themes and swatches. Use Kuler to create, explore, download, and share color themes that can inspire any design project.

Adobe Proto
The App is for prototyping mobile apps and websites. Gestures and rough shapes are translated into page elements, such as headers, navigation menus, or body text–and are linked to other pages to create an interactive wireframe.

Hadoop Compression – The Elephant That’s Not In The Room