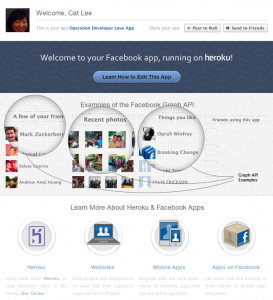 By teaming up with cloud application platform Heroku, Facebook is providing its developers a faster way to get Facebook apps up and running in the cloud. Developers have long been able to host their Facebook apps on Heroku on their own, but now Facebook has made it possible to start building a live Facebook app instantly, powered by Heroku.

Adam Wiggins, CTO of Heroku said in his blog post “Facebook wanted to make [its] new app creation process smooth and easy, and knew that [it] needed to embrace the cloud to do so. As the world’s most mature and powerful cloud application platform, Heroku was the obvious choice.”

Heroku supports Facebook apps in one of four languages/frameworks at the moment: Node.js, PHP, Python, and Ruby.
For getting started instructions, visit the Facebook developer blog entry from Cat Lee: Facebook and Heroku: an even easier way to get started

Fujitsu and ServiceMesh Partnership on the Cloud