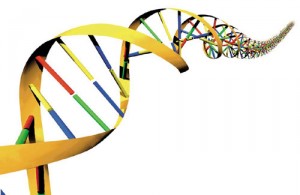 Scientists are constantly looking for alternative methods of storing information that will ensure long-term preservation of data at low cost and operating cost. Hitachi has discovered a new technology capable of recording and reproducing digital data using quartz glass for hundreds of millions of years. But DNA has attracted more and more attention as an alternative to traditional drives. Its advantages are its capacity.

A team of researchers from the European Institute for Biological Informatics in London (EMBL-EBI) devise a new technique for storing large amounts of data in a form of DNA for periods of up to tens of thousands of years.

According to scientists, the molecules can be a reliable carrier of information, especially in cases where it is necessary for a long time to hold a large amount of data. The dimensions of the molecules can create data banks, which will not need a huge room and the whole building as it is today. For example, European particle-physics lab in Switzerland (CERN) holds about 90 petabytes of big data information on about 100 tape drives, but the same volume of data could be held in 41 grams of DNA.

The technology has been in development for quite some time, but the main drawback it considered numerous errors when reading data from a large number of DNA fragments. EBI staff figured out how to escape from this problem – they suggested a method for synthesizing DNA and recreate large sequences pieces of data that virtually eliminates errors in decoding. Last week scientists announced in Nature magazine that they have stored 700 kb of information in the form of synthetic filament.

This new method of storing data would save 100 million hours of high-definition video in a cup of organic material. To give a measure – one gram of DNA may contain a number of information equivalent to those crammed into more than one million CD.

Besides the ability to store lots of information in a small space, the DNA has another advantage – it consumes no electricity. Think of the huge datacenters, these data storage centers that consume huge quantities of energy, charges for maintenance of large libraries and we immediately see the benefits that certain information might be stored in DNA.

Does this mean that your smartphone or your computer would use living material to store your data? We’re not there yet. If researchers are able to encode and read the data with a 100% success, the process is extremely expensive. However, their goal is not to democratize storage but rather to find a way to store large quantities of information in such vaults. Currently, researchers are improving the algorithm of encoding information, after which it will become the basis of a viable from a practical point of view of genetic information storage.

This attempt at data storage is not the first. Recall that in August last year, the U.S. bioengineers had successfully stored 700 terabytes of data on a single gram of DNA.

The Rising Value of Cloud Computing