Gartner Executive Programs (EXP) conducted a worldwide CIO survey from September to December 2010. A record-breaking participation with more than 2,000 CIOs representing over $160 billion in corporate and public-sector IT spending across 50 countries and 38 industries.

The survey revealed that although IT budgets projections will remain flat, almost half of all CIOs expect to operate their applications and infrastructures via cloud technologies within the next five years. They expect to adopt new cloud services much faster than originally expected. Currently, 3 percent of CIOs have the majority of IT running in the cloud or on SaaS technologies, but over the next four years CIOs expect this number to increase to 43 percent.

Mark McDonald, group vice president and head of research for Gartner Executive Programs, said “CIOs and IT have been boxed in between modest budget growth and growing legacy requirements, new lighter-weight technologies – such as cloud computing, software as a service (SaaS), and social networks -and IT models enable the CIO to redefine IT, giving it a greater

focus on growth and strategic impact. These are two things that are missing from many organizations.”

Mr. McDonald goes on to say: “The resource realities indicated in the 2011 CIO Agenda Survey raise the urgency and importance of adopting new infrastructure and operations technologies, such as cloud services and virtualization. These technologies were selected by CIOs the most often and are the top-two technologies for 2011 and are well-suited for this budget reality, as they offer similar service levels at lower budget costs.”

Gartner states that CIOs who expect to operate their applications and infrastructures via cloud technologies will necessitate that they “reimagine IT” and lead their organizations through a process of creative destruction.

The image below shoes the top 10 business and technology priorities for 2011. To view the CIO agenda key findings visit: Reimagining IT: The 2011 CIO Agenda 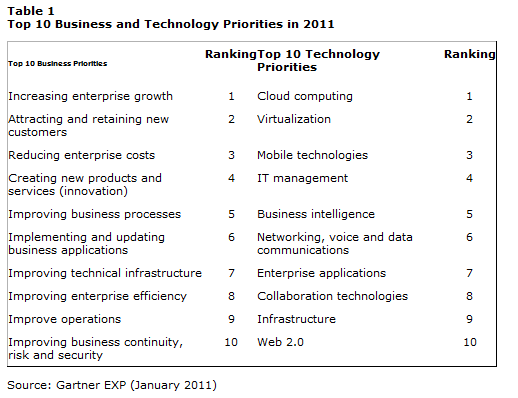