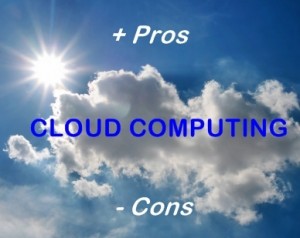 While there are many benefits to cloud computing storage as service, there are potential downsides to this also. It is important to know what cloud computing is – including the pros and cons associated with it.

Cloud-based storage services can save money, but bandwidth limitation remains to be one of the biggest concerns.

Gartner says that while cloud services “offer a low-cost tier of storage,” they offer some cautionary advice to these drawbacks – such as long latencies and limited bandwidth.

Gartner analyst Stanley Zaffos speaks during the Gartner IT Infrastructure, Operations and Management Summit and explained that “Bandwidth charges can exceed the monthly storage cost.”

He said that there are public cloud storage services available from Amazon S3, AT&T, Nirvanix, Zetta, and newer entries Dell and HP. Still, there are vendors such as Iron Mountain, EMC, VaultScape, Cirtas, ParaScale and Seanodes, that have exited the cloud-related business. He added that “it’s a difficult market to make money.”

Cloud services run as low as 3 cents per gigabyte per month, whereas cloud-based storage offers a low-cost metered storage method.

Potential customers tend to compare this with the costs they incur with storing on their own corporate premises, and estimates that on premises storage it runs about 75 cents to $1 per gigabyte per month.

Zaffos pointed out that it is important to consider a variety of things before jumping on the cloud storage bandwagon. He said that some certain corporate applications that are heavily transactional, are I/O sensitive or involve sensitive data, are not advisable to go shift into a cloud environment.

Making a decision to build a private cloud is suggested by Zaffros as an alternative route. He noted that several vendors are supporting this, including EMC, IBM, Mezeo Software, Scale Computing, Caringo, Symantec, Coraid and Cleversafe, among others. He noted the possibility of going to the “hybrid” route of private/public storage, and vendors that support this type of architecture -including Ctera, Panzura and StorSimple.

In deciding to make use of the cloud, take note of the risk that comes together with its benefits, and then find the best solution that suits your needs.