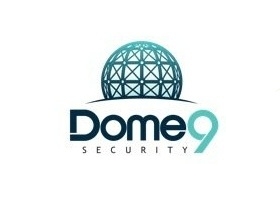 Ponemon Institute is pleased to present the results of Cloud Security: Managing Firewall Risks. Sponsored by Dome9 Security, this research was conducted to determine the challenges organizations face when managing access and securing firewalls and ports in their cloud environments. We believe this is the first study to look at the risk to cloud security because of unsecured ports and firewalls.

According to the majority of these respondents (52 percent), the state of cloud server security management is either fair or poor and 21 percent had no comment. This concern can be partly attributed to the finding that 42 percent fear that they would most likely not know if their organizations’ applications or data was compromised by a security exploit or data breach involving an open port on a cloud server.

The topics addressed in this study include:

The next section reports the key findings of our independently conducted survey research. The results provide strong evidence that organizations’ cloud servers are vulnerable, most IT personnel do not understand the risk and it is a challenge to secure access to and generate reports for cloud servers. 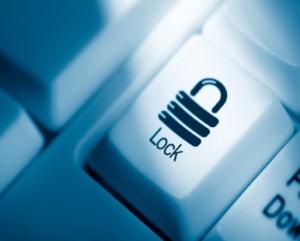 Twenty-one percent of respondents have no comment about the status of cloud server management in their organizations, which could indicate a lack of knowledge about how their organizations are managing access and securing firewalls and ports in their cloud environments.

In fact, 54 percent of respondents say the IT personnel within their organization have no knowledge about the potential risk of open firewall ports in their cloud environments.

Manually configuring a cloud server firewall frustrates IT practitioners. Eighty-five percent of respondents strongly agree or agree that configuring their organizations’ cloud server firewall manually is a difficult and sometimes frustrating process. In fact, 79 percent of respondents believe being able to efficiently manage security in the cloud environment is just as important as the security itself.

Most respondents (81 percent) agree that in the cloud environment, opening or closing ports to servers containing their organizations’ applications or data is managed via controls provided by the cloud service provider.

Responsibility for security in the cloud server usually rests with either IT operations and the business units. Forty-one percent of respondents say IT operations is most responsible for ensuring servers that house the organizations’ applications and data in the cloud are adequately secured. The groups most responsible for making sure the cloud provider has adequate security controls in-place are the business functions, according to 37 percent of respondents followed by 35 percent who say it is IT operations.

Leaving administrative server ports open and vulnerable to hackers is likely to happen, according to respondents. More than half (51 percent) of respondents say it is very likely or likely that in order to access cloud servers the administrative server ports are left open and the company is then exposed to increased hacker attacks and security exploits. Nineteen percent say this has already happened.

Data and applications in the cloud server are at risk because of the inability to manage access and secure ports and firewalls. According to 67 percent of respondents, their organizations are very vulnerable or vulnerable because ports and firewalls in the cloud environment are not adequately secured. Less than half (46 percent) of respondents say they have IT operations and infrastructure personnel who are very knowledgeable or knowledgeable about this risk.

Automated firewall policy management is more important in the cloud environment because it is elastic, according to 40 percent of respondents. Thirty-six percent say their organization cannot manage access or generate reports efficiently and 29 percent say they manage access through the cloud provider’s tools but cannot see the access reports. 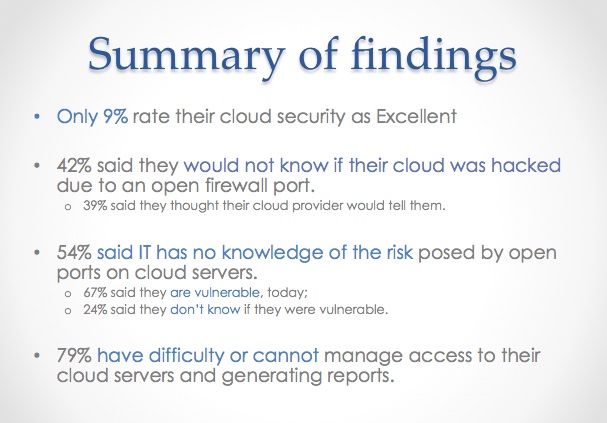 The IT practitioners in our study acknowledge that cloud server security is vulnerable and open ports expose the company to increased hacker attacks and security exploits. According to the findings in this study, some of the main barriers to mitigating risks include the current perception that cloud server security is not a priority and the lack of IT operations and infrastructure employees who are knowledgeable about the importance of securing ports and access.

We also learned that accountability for the security of cloud servers is rarely with IT security but with the business units or IT operations. We believe the primary reason for this perception is that in general the business units and not IT security are most responsible for provisioning cloud services. For example, research and engineering developers are adopting the cloud faster than IT departments and in many cases IT departments are not involved in the adoption and deployment of cloud services.

Based on the findings, it is recommended that organizations take the following steps:

As more data and applications migrate to the cloud, security of the cloud server should become a significant priority for the organization. These recommendations should help IT practitioners make a difference in reducing the risk of a potentially costly and damaging attack.

Ponemon Institute is dedicated to independent research and education that advances responsible information and privacy management practices within business and government.  Our mission is to conduct high quality, empirical studies on critical issues affecting the management and security of sensitive information about people and organizations.

As a member of the Council of American Survey Research Organizations (CASRO), we uphold strict data confidentiality, privacy and ethical research standards.  We do not collect any personally identifiable information from individuals (or company identifiable information in our business research). Furthermore, we have strict quality standards to ensure that subjects are not asked extraneous, irrelevant or improper questions.