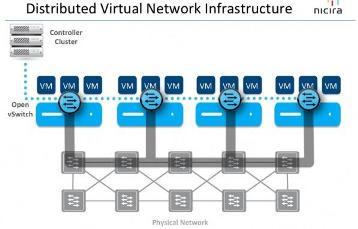 Nicira is a new startup that is making great waves in the cloud computing industry. Everyone seems to be impressed with its networking virtualization solutions and is waiting to see who will next buy its software.  To date, among the users of its Network Virtualization Platform include eBay, AT&T, NTT, Rackspace and Fidelity Investments.

Martin Casado is the brainchild of Nicira who gained popularity after he completed his Stanford dissertation on OpenFlow protocol. This project was backed by $50 million investment funding from New Enterprise Associates, Lightspeed Ventures, Andreessen Horowitz and Diane Greene of VMWare.

Nicira has made significant efforts to solve the migration problems created because of VMWare’s action to push virtualization and hypervisors for computer and business IT solutions. The benefits of virtualization provided a way to separate physical infrastructure from computing solutions very easily and servers were also allowed to provide more agility for compute infrastructures. These advantages allowed developers to revolve servers and to integrate them in matter of minutes. Networking took care of the storage requirements to hold the virtualized infrastructure together. The problem is that networking is tied up with a physical hardware and an IP address that requires manual configuration.

Nicira’s OpenFlow comes in very handy because this protocol allows users to manage and control physical intelligence switches from the routing packet, separate and place them on commodity servers. This new protocol looks very promising in solving the problems with virtualization.

Nicira’s strength comes from its Open vSwitch that is initially placed inside the hypervisor, which has the ability to run with variety of hardware and protocols. The Open vSwitch communicates with the controllers running the software inside the physical storage then enables the OpenFlow to work.

Nicira also has an impressive agility, strong cloudbursting features and follow-the-sun storage. One of the companies that truly benefit from these services includes NTT for their operations around the globe. NTT uses Nicira’s cloudbursting to leverage its desktop-as-a-service product, which was used in Japan after the earthquake to handle the rolling brown outs.

eBay, an E-commerce giant uses Nicira to efficiently and quickly deploy applications within minutes. This is possible since engineers do not need manual configuration to provide their customer’s development needs.

Rackspace, on the other hand, takes advantage of Nicira’s agility to change product offerings and to leverage its infrastructure-as-a-service.

Other than Nicira, there are other startup players that are dedicated to develop software that will eventually free the cloud computing system from the physical network. Among these players include Embrane, Big Switch and ConteXtream. Nicira, however, has stepped ahead of its rivals because customers have tried and tested its deployment platform.

Vivek Kundra Moves Federal IT to the Cloud

Parallels Introduces SMBs to the Cloud