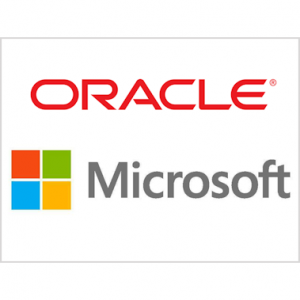 It may seem like a surprise, considering that many of their products are direct competitors, but Oracle and Microsoft have recently joined forces, in order to introduce Oracle’s database, application server, Java API, and other products to Microsoft’s Azure cloud service.

The deal goes both ways, and also works out in Oracle’s favor due to Microsoft allowing their Windows Server Hyper-V virtualization platform to be supported by Oracle. According to Microsoft’s head honcho Steve Ballmer, the partnership is a new and significantly more constructive partnership with Oracle that will benefit both of their enterprise customers via an increased flexibility and the ability to adapt in a rapidly changing business landscape. Oracle co-President Mark Hurd adds that it gives customers more freedom in how they want to access and deploy their software.

Oracle’s support for Azure and Hyper-V has already taken effect last June 24, which means that Customers with Oracle licenses will now be able to use them even in Azure deployments. However, there are still special rules that Oracle has created for “authorized cloud environments,” which applies to AWS and Azure.

Microsoft is a little bit more generous, offering infrastructure services instances of Oracle products, such as their database and Weblogic Server. Oracle, on the other hand, will offer users the chance to run a Linux distribution on Azure. The partnership also requires Microsoft to provide Java in a fully licensed and supported format in Azure, as opposed to the limited Java capabilities it employed in the past.

According to some industry experts, Oracle basically had very little choice but to enter into the partnership, as Microsoft currently owns a huge share of the OS market, and that Oracle can only hold on to their huge share of the commercial database market if they can run on every popular OS platform.

One big effect of the partnership on the cloud industry is that it solidifies Microsoft as a cloud leader, as their platform is already popular with hosted service providers, but will be able to expand their userbase further once off-site, remote hosting service providers start pushing for Oracle to certify on their MS operating systems.

According to Microsoft’s president of server and tools business Satya Nadella, there’s nothing really shady about the partnership as many Oracle customers are already running Oracle software on Windows, and that the partnership merely extends the same dynamic to the cloud.