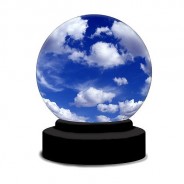 Public cloud computing is one of the biggest factors that speed up the pace of changes that occur in enterprise software these days. Newcomers in the market are constantly launching innovations that can disrupt and attack the most price-sensitive sectors in the market. Most of these newcomers, like Salesforce.com, are scooping up customers at the low-end of the market and are slowly but surely making their way up-market, changing the customer experience, structure, and economics behind the industry along the way.

Definition of a Public Cloud

The National Institute of Standards and Technology (NIST) have defined public cloud as “the cloud infrastructure that is provisioned for use by the general public,” adding that said infrastructure may be managed, owned, and operated by an academic, business, or government organization (and in some cases a combination of two or more).

Public Cloud Adoption in the Enterprise

The adoption of public cloud computing in manufacturing depends on the company’s CIO, since there are two kinds of CIOs in the industry right now. The first one is the CIO who focuses only on risk aversion and compliance to industry standards, and the second one is the kind of CIO who believes that it is his job to scout out and implement new technologies that will address his company’s strategic needs. The latter is more welcoming of public and hybrid clouds, and will probably adopt them in order to better integrate with distributors, dealers, and suppliers.

At the end of the day, Gartner’s forecast shows that BPaaS and its subsegments are gravitating towards greater support for e-commerce management and enterprise-wide transactions. It is easy to see that Gartner is seeing a potentially strong interest in BPaaS with a third of the entire 2012 public forecast favoring the BPaaS segment.