Casa Video and Netflix are examples of organizations that use the public cloud for core operations, with Casa Video using Amazon Web Services to run their entire operations, from computing to storage and running multiple instances with load balancing. Netflix, on the other hand, uses Amazon cloud services to handle data center operations during peak demand times, as well as to deliver content to users using an Amazon regional data center that is nearest to said user’s location. 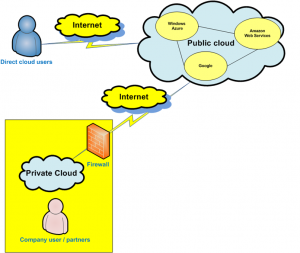 Sadly, Casa Video and Netflix’s examples are exceptions rather than the rule when it comes to usage of public cloud for core operations, since a lot of organizations shy away from depending on public cloud due to concerns related to privacy, security, and the hosting of their data alongside their competitors. This is unnecessary, since a large number of applications within any organization are unaffected by the aforementioned concerns when it comes to public cloud usage. Below are just the 10 most common apps that are considered “public cloud ready”:

Development and Testing apps should be the first set of applications to be considered for public cloud, since application, virtualization, and database servers tend to occupy a single physical server each, which has resources that they don’t utilize beyond the 10% range. Even virtualization results in underutilization, due to the amount of test data involved, which pales in comparison to the amount of actual production data. Migrating all of these services to a public cloud is cost efficient, since it will allow the organization to only pay everytime they need to use said services. Additionally, they won’t have to worry about storage expenses, latency, and performance.

Now that organizations are starting to see the benefits of DevOps, they are starting to use more design, prototyping, wireframing, mash-up, automated test tools, and development platforms for continuous integration. All of these services would be better off stored in the public cloud, as it allows programmers to only spin them up when needed, and to completely spin them down when not. Security is not a concern, since these types of services don’t really contain any sensitive internal data on the public cloud.

Not only are training servers easy to spin up at the start of training, it’s also easy to spin down at the end. Additionally, they only contain fake or simulated data instead of mission critical ones, so they are naturally suited to the public cloud.

There are also cloud provisioning tools designed to spin up or tear down servers in the public cloud remotely, which means they can also be set up in a way that the training groups can use the applications on their own without supervision.

A few years ago, The New York Times had to convert its entire archive of back issues into PDF Format. To do so, the newspaper used the public cloud, and the entire project was done in 24 hours with the use of 100 servers.

A one time big data project like this is ideal for public cloud, since it would not be feasible for an organization to buy a large amount of physical servers, even virtual ones, of the project only requires it for one day.

Company websites, product catalogues, and other write occasionally, read often websites and portals are well suited to public cloud. Buying your own server and hosting them would be more expensive and time consuming than depending on a public cloud. These types of websites do not really require a deep level of security since it’s is meant for public viewing anyway.

There is a lot of Customer Relationship Management Software already hosted in the cloud, and the system is usually not that tightly integrated with critical data, with most CRM only requiring read only access to customer data. Additionally, hosting CRM software on a public cloud makes it easier to outsource Customer Service to a different location, so that you don’t need to have all the customer support staff in the main office.

Like CRM Software, Project management, expense reporting and time management applications are a good fit for the cloud, with main difference that they may have access to sensitive sales and financial data. In which case, the data that needs to be secured should be hosted on the private cloud, resulting in a hybrid public/private cloud. This will still free up a lot of resources in the private cloud for mission critical applications and production.

This is a natural direction for email, since large companies have already been using cloud based archival services for their old email messages in accordance with Sarbanes Oxley or Basel II regulations. Moving to public cloud shouldn’t rock the boat too much and will allow organizations to free up the manpower being used to internally manage their private email cloud.

You will be surprised to find out that a lot of non-critical apps are being hosted along with mission critical and operations-related apps, crowding the servers even though they are only used occasionally. It would be more cost efficient to move these non-critical apps, particularly recruitment management, benefits administration, and other hr applications, to a public cloud, especially since public clouds are pay per use and will not cost you anything outside of what you’re using.

The advantage of using public cloud for anti spam and anti virus apps is similar to the advantages of the other applications outlined above. Additionally, security is no concern since these types of apps are already designed to be secure and to catch intruders, so there’s no sense for intruders to target them.

At the end of the day, CEOC and CFOs would benefit if CIOs and senior IT management start using more of public cloud, because it moves fixed cost into the variable cost column. In fact, the only thing preventing most companies from migrating is concerns about security and privacy, and the loss of control over important internal data.

Fortunately, said issues about security and privacy don’t really apply to majority of individual applications these days, as they only access non-critical data that is of no use to people who are not in the organization. As such, they can be migrated to a public cloud, freeing up much needed resources on the private cloud, which can then be used by applications that are mission critical and deal with sensitive data.

The Cloud: What's in it For You?