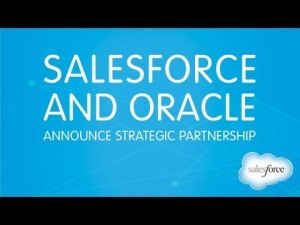 In the past, companies have relied on server-client models that depend on cloud-based infrastructures, which tend to source its data from remote devices and locations, before collating and transforming whatever they collect into information that can be used by a wide variety of computing devices. However, there seems to be a major industry shift looming in the horizon, and companies that aren’t ready to adapt may see themselves left behind not just by the competition, but by the industry itself as well.

The Internet of Things and How it Brought Oracle and Salesforce.com Together

The term “Internet of Things” was coined by Kevin Ashton in 1999, and refers to the virtual representations of uniquely identifiable objects in an Internet-like structure. One of the technologies that are considered as a prerequisite is the RFID, which allows objects and even people who are equipped with it to be managed, inventoried, and catalogued by computers. The Internet of Things has allowed even things that have no means of connecting to the internet to have virtual representations on it, opening up the web to a significant number of new opportunities.

The internet of things is cloud dependent, and as such, it is showing up on the radar of two of the most influential companies in the cloud industries – Salesforce.com and Oracle. Both companies have realized that the need to be Internet of Things-ready is so important that they were willing to set aside their past differences and aggressive rivalry, and inking a nine-year partnership that will see each company’s respective flagship products and technologies starting to support tight integration with each other.

Who Will Really Benefit from the Partnership?

Salesforce.com and Oracle are both industry leaders, and they’re not likely to enter into any partnership – much less one with a long time competitor – unless they stand to benefit from it. Both companies have made amends because with the way the industry is shifting, they will only be able to keep up if they leverage each other’s strengths and influence.

Oracle, in particular, is banking on the partnership – going so far as to abandon its old cloud strategies. Whereas they used to buy up and assimilate partnership into their own service, they are now compromising and allowing other companies like Microsoft and Netsuite to offer tight integration with their software. One benefit of this is that it frees Oracle from the old approach, which is not only expensive and time consuming, but also doesn’t lend itself well to the more unified and giving approach required by the Internet of Things.

Salesforce.com also stands to benefit, particularly with regard to the tight integration to Oracle that they can start touting as key strengths of their services. Whereas they used to consider Oracle users as customers of the competition, they are now potential customers that can be convinced to migrate, as there would be minimal inconvenience with the shift since they don’t need to abandon Oracle entirely.

Of course, whether customers will benefit from the partnership or not is all a matter of perspective. Skeptics will probably point out that this could lead to market consolidation – and even monopoly – once the market leaders join forces. However, the more open minded customers and industry experts probably see it as their lives getting easier, as they are no longer tied to one service simply because of segmentation of standards. Now that different services are cross-compatible with each other, they have a lot more choices and won’t have to start everything from scratch if they move to another company, software, or service.

At the end of the day, though – one group that really stands to benefit from the partnership is the investors. In fact, some industry experts suggest that the partnership was an act of desperation meant to appease investors, who have recently been disappointed at the software and cloud related sales of the companies. With the partnership of the two industry leaders, they may stem the tide of investor backlash or at least buy themselves enough time until they come up with something that will turn things around and make the investors smile again.