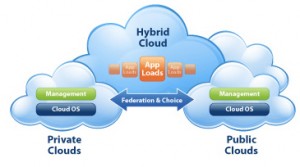 Despite the many advantages provided by cloud computing technology, the rate of adoption among large enterprises has been surprisingly slow, especially when compared to the way SMEs have embraced the technology. The main reason for the slow rate of adoption is the fact that migrating to the cloud would generally require the discarding of many legacy hardware and applications that no longer have any purpose.

SMEs and new startups don’t have many of either types of legacy infrastructure pieces, and sometimes were able to start their operations on the cloud, but large enterprises are burdened with legacy infrastructure that cost hundreds of thousands of dollars in hardware and software, not to mention that discarding them and moving to the cloud would result in disruptions to their operation, further costing them money.

The solution adopted by many large enterprises, particularly ones who felt that they are getting left behind by companies that have already moved to the cloud, is to deploy a hybrid cloud model, which is basically using their legacy infrastructure alongside a public cloud service, such as Amazon’s Simple Storage Service or Google Drive. The main benefits of a hybrid cloud consist of gaining the advantage of the technology, such as flexibility, agility, and cost-efficiency without sacrificing their expensive legacy infrastructure nor requiring massive downtimes just for the migration.

Unfortunately, many large enterprises are still on the fence even with the benefits provided by a hybrid cloud deployment, mainly due to security concerns. The migration of resources to the hybrid clouds increases the complexity of software and configuration, not to mention other security issues related to managing the communication link between different sites during the delivery of IT infrastructure from the cloud to the enterprises. Firewall rules, and incompatible network policies.

Software as a Service (SaaS) – with SaaS, the enterprise hosts and operates their application while users access it over the Internet. The main benefit of SaaS is that there is no need to buy any software licenses or equipment for the application. Most of the time, the only cost involves paying for the use of the software application. Some examples of SaaS are the popular webmails Gmail, Yahoo Mail, and even Google Calendar.

Platform as a Service (SaaS) – as the name implies, PaaS provides an entire platform that can be used for building and running custom applications, therefore reducing the complexity and cost involved with application development, which used to include hardware, database, operating system, middleware, and other software. PaaS allows enterprises to build applications without a single tool on their local workstations. PaaS also greatly reduces the time needed to build applications compared to conventional Java or .Net methods.

Infrastructure as a Service (IaaS) – with IaaS, the entire IT infrastructure is migrated to the cloud, and the responsibility of tackling issues and managing everything from server configuration, software patching, application deployment and everything in between is in the care of the cloud provider. The main benefit of this type of delivery model is that it saves a lot of money and effort that the enterprise would otherwise have to shoulder. In most cases, enterprises no longer need an entire department and office space just for the maintenance of their infrastructure, as it is already shouldered by the cloud provider.

Regardless of service model delivery, there are also four different deployment models used based on the requirements of the enterprise, such as:

Public Cloud – this is a cloud model usually offered by large service providers to the general public over the internet, usually in the form of applications and storage. Most examples of the public cloud are either offered for free or through a pay per use model. Examples include Amazon’s Elastic Compute Cloud, Google AppEngine, and Windows Azure Services Platform.

Private Cloud – this type of cloud is basically the same as a public cloud in terms of operation, but the resources are operated exclusively for a single organization. The service provider can be a third party or the organization itself. This type of cloud is used by private organizations for providing hosted services to people behind a firewall, and is preferred by enterprises who want absolute control over their data.

Community Cloud – this is a type of cloud model wherein several organizations with common requirements share a single cloud infrastructure. It is preferred by organizations that don’t want to depend on major cloud vendors due to privacy, efficiency, and security concerns.

Hybrid Cloud – as the name implies, a hybrid cloud is the combination of two or more clouds (private, community, and public). It’s main feature is that it uses existing resources on premises and combines it with cloud functionality. The main benefit of this model is that it allows enterprises to still have control over their data while enjoying some of the benefits of the cloud.

Many large enterprises these days use hybrid clouds, in the sense that they place their applications on site and partly in the cloud. Due to the importance of data in many enterprises, the ability to monitor, protect, and enforce access permissions is of utmost importance. The tiniest of holes in the security is unacceptable and many complex systems and solutions are devised in order to protect the integrity of their data security.

Koushik Annapureddy of the Aalto University published a study conducted by Symantec, around 83% of enterprises rated security as an important criteria to be considered when it comes to hybrid clouds. 79% cited backup and recovery and 76% believed continuous data protection is included in the top priorities.

Challenges Associated with Moving Components to a Hybrid Cloud

Cloud Computing Technology has matured in a way that it becomes a necessity for businesses and organizations these days, but it is still up to the enterprises to decide if the benefits it providers are worth the security challenges they must hurdle. As provided above, there are ways to address the concerns as long as they know what they want and take steps to ensure that they apply the countermeasures correctly. In a sense, Hybrid cloud works under the same principles.