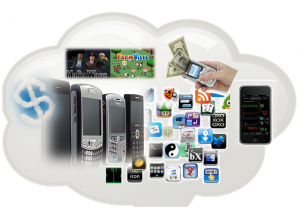 Oracle and Samsung Electronics are about to enter into a partnership to provide companies with a set of mobile services in the cloud. Such an agreement would allow Oracle to push its software solutions in the cloud and Samsung to have more opportunities in the enterprise market. The Korean manufacturer has also partnered with Microsoft and SAP earlier.

Both companies has stayed out on comments, but learned that the relationship between Oracle and Samsung may have similar strategic lines to other partnerships recently made by other companies within the IT industry, such as the agreement between IBM and Apple. This can be crucial for Oracle if the rumors that Samsung wants to buy the Blackberry prove to be true.

Today there is a rapid increase of mobile cloud services in businesses. Many companies have problems with how to handle such services. Given the rapid ascendancy of the mobile business in general, the commoditization of technology is another important factor underlying motivation.

Although Oracle’s software is used by many companies, the company has an unclear strategy in the cloud. The question is whether Oracle can convince existing customers to adopt mobile services based on the cloud. While the traditional Oracle software installed permanently in many companies, but the lack of clarity cloud strategy, compared to other more aggressive players, Oracle is not considered at the forefront in this field.

Given the rapid adoption and invasion of mobile devices in the business field, the consumerization of technology is another key that drove the Oracle-Samsung alliance.  They gain ground on issues related to the distribution of their respective applications, same as impelled adoption not only for the company but for the consumer market. The division of Samsung mobile devices offer products at much more affordable prices for emerging markets.

The traditional Oracle software remains solidly embedded in a huge amount of business, strategy and efforts being devoted company database enters the cloud are less consolidated, and the company is being increasingly seen as a late eating compared with other companies with more aggressive strategy.

Developments in the segment of enterprise mobility and cloud computing have transformed the way organizations conduct their operations. As Samsung is the world leader in devices, Oracle requires that the South Korean company to exploit its database solutions in the cloud, which the US firm has identified it as one of their upcoming engines in the industry.