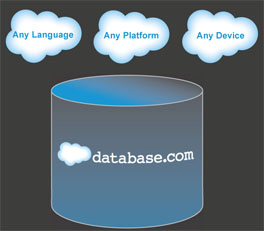 Salesforce.com Inc. Chairman and Chief Executive Marc Benioff  announced today at Dreamforce “Database.com”, a database-as-a-service product that he hopes will take business away from Oracle Corp. and Microsoft Corp., in a market Gartner estimates is worth $21.2 billion.

Benioff announced Database.com to a crowd of 14,000 at the company’s annual customer meeting in San Francisco. Customers will access the product, stored on Salesforce computers, over the Internet as part of the cloud computing trend.

“Databases need to be in the cloud,” Benioff said, referring to the emerging market as a “massive” market opportunity. “You can use Database.com from any language, from any device.”

Salesforce is opening up the same giant database-as-a-service it already uses to power the Salesforce CRM application itself — and offering a full complement of developer tools and security controls to go with it. Instead of subscribing to Salesforce, you subscribe to Salesforce’s back end. It’s similar in spirit to what Amazon did when it decided to make its infrastructure available to subscribers through Amazon Web Services.

What is Database.com? Watch this video to understand more.

Ironically, Salesforce will use Oracle technology to reach new customers with its cloud-based database service. Oracle’s database technology has long been part of the infrastructure of Salesforce’s products.

A key advantage of Database.com, according to the company, will be users’ ability to focus on building applications on top of Database.com, rather than having to focus on the management and maintenance of a locally stored database. Salesforce also touted the database’s flexibility, noting that developers can write applications for it in a variety of languages such as Oracle’s Java and on a variety of platforms, including Microsoft Azure.

At the conference, some Salesforce customers who currently use Oracle’s database said they are interested in learning more about Database.com. Alan Farnsworth, the chief information officer at Bausch & Lomb Inc., for example, said he likes the idea of Database.com’s promised flexibility, scalability and easier integration of unstructured data.

The San Francisco-based Salesforce expects to make Database.com commercially available next year, initially for free for small groups building small databases. For more than three users or databases with more than 100,000 records, monthly fees begin at $10 based on the number of users, transactions or records stored in the database.