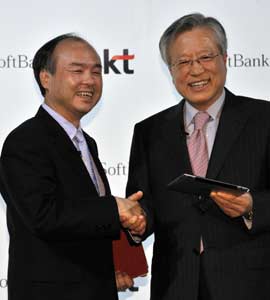 KT the second largest South Korean mobile operator is entering into a $65 million cloud joint venture with Softbank Corporation. This new cloud venture set to kick off in September will focus on disaster recovery and provide data center and cloud services to Japanese companies.

The ownership of this venture will be distributed into 51% for KT and Softbank will own the remaining 49%. The data center will be built in Korea where the first facility is set to be completed by October. When completed the data center will be capable of operating 10,000 server computers. Since the earthquake hit Japan on March 11, Japanese companies have been looking at Korea to store their data.

KT announced plans to rise as the “cloud computing hub of Asia,” providing cloud services to 1.5 billion people in a 2,000 kilometer radius.