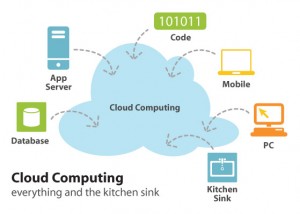 Cloud computing continues to gain more mainstream adoption as more companies move into the cloud. This article focuses on where the cloud space stands in the market and the future driving trends in these five specific areas: Infrastructure as a Service, Platform as a Service, Software as a Service, Cloud Storage and Private/Internal Clouds.

Commodity Infrastructure as a Service

Infrastructure as a Service (IaaS) is what most IT professionals think about when they talk about the cloud. IaaS is also referred as Cloud Infrastructure service and is considered as the core of cloud computing.

Forrester, an analyst firm predicts it will generate greater revenue potential which can clearly be seen from Amazon Web Services, the undisputed commodity IaaS revenue leader. Investment bank, UBS reported that AWS earning statement could jump from $550 million in 2010 to $750 million in 2011. This year, AWS reveals that its S3 storage service hosts doubled as it now hosts more than 262 billion objects.

Rackspace, the second largest commodity IaaS provider also reveals an increase in its revenue. With its Cloud Servers and Cloud Files, they reported an 18.1 percent increase from $31.4 million to $37.1 million for the first quarter of 2011.

Both AWS and Rackspace’s rapid revenue growth can be credited from the growing usage of the IaaS. Despite this reported growth, some are still reluctant to consider commodity IaaS for mission-critical applications in the cloud. A recent survey showed that 52 percent responded that security concerns are holding them back from using the cloud.

Large organizations rely on commodity IaaS for testing and developing new applications, and for hosting applications that are less-critical, while small businesses use it for mission-critical applications.

Commodity IaaS will continue to shape up and take on more enterprise workloads. Enterprise-focused clouds will look to further specialize their offerings. Survey respondents cited the need for more insights from operational data and more control. Cloud users and providers cited “analytics” and “automation” as a service they’d like to have.

Providing on-demand access to computing and storage resources is the main focus of Enterprise IaaS clouds. One difference between the two is the difficulty to distinguish enterprise IaaS adoption rates and market size from those of commodity IaaS. Enterprise IaaS clouds don’t need to attract a number of users as they are dealing mostly with revenues from larger deals.

Even though adoption rates and market size can be hard to distinguish at Enterprise IaaS, it is still doing fine among its target audience.  Instead of taking the scale-out approach of commodity IaaS, enterprise IaaS providers build their clouds using high-end gear.

One of trend in Enterprise IaaS is running VMware at the hypervisor layer. This aims to capitalize the frequency of VMware within many corporate data centers. A survey of IT executives shows that hybrid cloud as the top priority. Through this, organizations won’t commit entirely to public cloud resources and private cloud resources as they can use either model.

On top of the core enterprise IaaS platform, the entrance of IBM into the enterprise IaaS adds diverse services. This includes tools to enable dynamic application development to advanced analytics services. As part of IBM’s SmartCloud offering, it has promised Hadoop processing service in addition to its existing WebSphere and Cognos services.

For enterprise IaaS providers, one challenge would be to harden their clouds for enterprise applications. In order to attract more enterprise developers, they have to loosen access to their platforms. The hybrid model for IaaS developers could be another option.

Platform as a Service

The huge financial investment that Paas gained in the past years proved that is continues to gain popularity. Everyone needs a service that promises to fundamentally alter the way applications are developed, deployed and managed.  Still, it remains to be dependent on individual developers, web startups and enterprise developers. Developers are flocking to Paas for their enterprise applications.

Microsoft’s Windows Azure platform is at the center of its cloud efforts that has attracted a number of customers. Among them are Toyota, the Associated Press and Intuit.

On the first half of 2011, PaaS providers address the concern about lack of control and lack of choice. Based from the survey, “Complexity” is the major issue that PaaS seeks to eliminate; followed by Interoperability” and “Lock-in.”

The convergence of these trends – the investments by large vendors, the advances in control and choice, and the increasing popularity of web and mobile applications – are the biggest drivers of PaaS adoption.

Microsoft’s success with Windows Azure suggests the possibility of success for VMware, Red Hat and Salesforce.com as they continue to use PaaS application platforms.

It is also interesting to see Google App Engine as PaaS adoption picks up. Google promises more features will make their way into the standard App Engine.

One good example is the CRM service of Salesforce.com’s multi-billion-dollar business. SAP and Oracle are also embracing SaaS for their heavy-duty applications.

Some reported that SaaS has inspired Everything as a Service, where any IT process or application or business function is available as a service.  Gartner estimated SaaS to reach $10.7 billion in 2011. Another analyst firm, IDC, predicts a $72.9 billion cloud services market by 2015.

GigOM’s survey reveals that 61 percent derive their revenues primarily from SaaS subscription fees; and 74 percent identified a SaaS offering as the cloud computing services they are using.

Aside from the endless emergence of new applications, SaaS will focus on integration of data and services. This integration could prove to be a valuable offering that will address the growing number of cloud services.

Most survey results reveal that users of multiple SaaS applications plan to increase their usage over time; which is both a challenge and an opportunity for data-integration vendors.

As SaaS use grows, data virtualization can pick up its momentum by incorporating data from mobile devices and other end-user derived sources. SaaS providers must also find ways to work tightly in integrating data among applications.

Cloud storage is defined as the independent storage services in the cloud and is the most widely deployed cloud services.  It is currently being used to backup data, although it also serves as primary file- or content-storage options for web applications, like for Amazon’s Simple Storage Service (S3).

Cloud storage is risk-free as data is already stored elsewhere without the need to be accessed by production applications. However, it is not really good at primary storage as it needs high levels of features, network performance and availability

Nasuni is a company that is making a name in primary cloud storage. It uses a virtual gateway to route files securely and reliably to cloud storage infrastructure from a number of providers.

The innovation on cloud storage will focus on primary storage for enterprise applications in the cloud. As vendors such as HP and Dell have storage businesses and public clouds, they could benefit from leveraging their storage expertise to make primary cloud storage a reality.

However, companies deciding for primary cloud storage must innovate on data-transport front. It won’t be attractive for customers if they rely only on the public Internet for uploading and downloading primary data.

Private cloud is considered as the delivery model choice of large enterprises and other risk-averse businesses. GigaOM survey reveals 63 percent of respondents utilize private clouds or hybrid clouds as the focus of their cloud strategies. More traditional businesses are also emerging as private-cloud customers.

Over the past years, these four most-prominent private cloud startups – Nimbula, Eucalyptus Systems, Cloud.com and Abiquo – have raise a combined total of $73 million.

It has been noted that there are 2 interesting trends taking place – the advent of PaaS software designed to run on private clouds, and the OpenStack.

Private clouds are here to stay whether as a whole or part of a hybrid cloud environment.  For private cloud vendors, choosing to rely on their partners or building their own features will be a big decision.

Two major trends can be expected in the coming years – advanced hybrid cloud capabilities, and a wave of innovation around higher-level features and specialized functions.

Survey data in this article is taken from the GigaOM Pro report “A field guide to the cloud: current trends and future opportunities” by Derrick Harris.