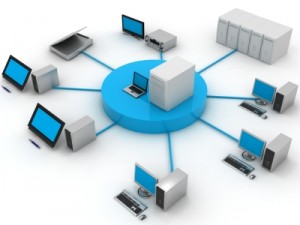 In the past two decades, enormous innovation has taken place on top of the Internet architecture. Email, e-commerce, search, social networks, cloud computing, and the web as we know it is all good examples.

With the evolution of cloud computing and virtualization, IT managers have had to change in recent years the way we interact with technology. An important part of this change has come from the hand of software defined technologies.

This development does not only affect virtualization. Now it is possible to optimize the performance of complex hardware systems. For example, instead of creating a physical NIC, an administrator can create hundreds of virtual NIC from a network. These innovations have helped data centers to improve the control, management and data loads.

We are about to witness a revolution in the networking towards so-called “Software Defined Networking” or “Software Defined Network” (SDN). It is not quite easy to define what is meant by SDN. SDN enables innovation in all kinds of networks — including data centers, wide area telecommunication networks, wireless networks, and enterprises and in homes — through relatively simple software changes.

Definition on Wikipedia: “Software-defined networking (SDN) is an approach to building data networking equipment and software that separates and abstracts elements of these systems. SDN allows system administrators to network services more easily through abstraction of lower level functionality into virtual services. This replaces having to manually configure hardware.”

SDN thus gives owners and operators of networks better control over their networks, allowing them to optimize network behavior to best serve their and their customers’ needs. For instance, in data centers SDN can be used to reduce energy usage by allowing some routers to be powered down during off-peak periods.

SDN focuses less on decoupling and more on programming interfaces that provide network equipment, whether or not a separation of control plane and footblocks. A secondary reason for this shift in focus is because Cisco recently announced that as part of its offer of SDN, it would provide API across multiple platforms.

This is not only a focus on Cisco, and other vendors, including Arista, Extreme and Juniper currently provide direct access to their products. An advantage of this approach is that it allows very detailed access and controls the network elements, but does not provide a central point and is vendor specific.

With a common definition of SDN, overall control of the network is achieved by centralizing logic of the control plane function, and network operations organization can cope with a group of network devices as a single entity. With SDN, network flows are controlled at the level of abstraction of the global network, rather than at the individual device level.

The group most associated with the development of standards based on SDN is the Open Networking Foundation (ONF). The ONF was launched in 2011 and has a vision to make the OpenFlow and Linux Foundation’s new OpenDaylight based SDN as the new standard for networks. The SDN ecosystem amplitude is reflected in the fact that today ONF has more than 70 members of various types, including suppliers providing silicon and switches, network devices, controllers, test equipment, telecommunication services, data center services, hyper-scale and smartphones.

SDN addresses the ever changing network requirements to the dynamic computing and software needs of data centers, cloud environments, etc. The driving trends for a new network paradigm include the rise of cloud services, focus on Big Data, consumerization of IT, and changing network patterns.

With the cloud is more flexible now in the IT collection, services and applications, there is virtually on demand from virtual server clusters. However, most networks – whether in the data center or in the corporate network – not built for this type of computing. They are more rigid and oriented to the physical connections. One way out of this dilemma promises SDN. The new technique can also virtualize the network so that they can respond flexibly to the needs of different applications.

SDN enables automated virtualization an open network infrastructure unlike the conventional very hierarchical network architectures. Due to the increasing virtualization of networks, we will see a high demand and a correspondingly significant market growth for SDN in the coming years.

For example, cloud providers will benefit from the new technology, since they receive a highly scalable multi-tenancy environment. Service providers can offer higher pay services by policy-based control and analysis in a more flexible way.

There is no doubt that SDN can provide significant value to IT organizations. There is also no doubt that in the current environment, SDN is only suitable for early adopters. However, given the combination of the huge investments being made by the big players, along with the current wave of acquisitions, the SDN landscape is likely to change significantly in the next 12-18 months.

In coming days, we would see the availability of the functionality that enables organizations to effectively manage this new form of networking. The second is the availability of a wide range of applications that leverage centralized control inherent in most forms of SDN.