I can’t help but take notice of the recent string of cloud failures we’ve been hearing about this year. Blogger went down for about 20 hours last month and Microsoft’s BPOS hosted bundle also reported a significant amount of downtime. Perhaps the most notable was when Amazon’s cloud was overloaded with Lady Gaga fans clamoring to get her album for 99 cents.

All of this talk of cloud failure has once again called into question the reliability of the cloud. Can we trust it? Is it safe to put all of your valuable and sensitive data in the cloud? I think it is important to note that part of the reason these incidents get media attention is because they happen in the public space and many companies are often affected. This stands in opposition to on-premise systems that, when down, go without public notice because the incidence occurs behind closed IT doors.

The truth is that cloud computing has a proven track record of success. One that much outweighs the incidences of failure. So, is all of this negative attention really warranted?

You can see my full post on my CRM site, but here are some interesting numbers gathered from a study done by the Radicati Group in 2008. It looked at uptime for on-premise email solutions. 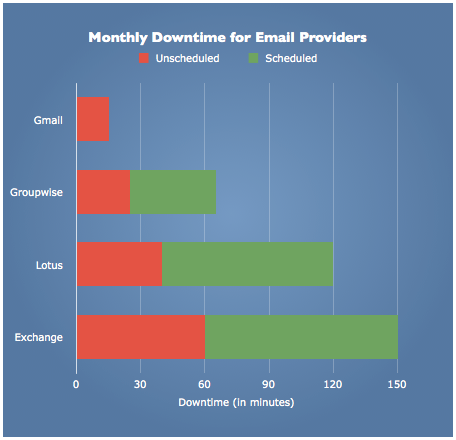 What this data tells us is simple: servers will fail. Technology is not perfect. However, cloud companies are not less reliable, and in fact, it appears they are better at getting back online compared to their on-premise counterparts.

Cloud computing is still a relatively nascent technology. It seems we have got a good grasp on it, but there is always room for improvement. The goal would of course be for the system to operate at 100 percent all the time. Denis Pombriant of Beagle Research Group gives his take on where the cloud needs to go:

“If you’re going to have a truly robust and reliable infrastructure, you’re going to have to build much greater reliability into your systems,” he says. “Take electric utilities these days. They all have more generating capacity than is online at any one time because they take plants down, and then they put them up. They eliminate all of the obvious possibilities for failure. That’s what cloud computing has to evolve towards.”

What are your thoughts on the cloud?