As cloud computing technology matured, people eventually realized that hybrid cloud has its place, as it managed to change the way businesses consume cloud resources while also filling in gaps in the workload functionality of the technology. As time went by, the technology has matured further and businesses were able to connect multi-site hybrid clouds over long distances. However, the distance between sites means that control is severely limited and latency issues are present alongside connection reliability concerns. There is a massive potential in Hybrid Cloud technology if organizations are able to solve the problems associated with multi-site hybrid clouds.

A couple of years ago, VMware, EMC, and Brocade collaborated on a study that will validate a solution for dynamically migrating applications live across data centers that are separated by a latency of up to 10 ms round trip (~550 miles) without business interruption. This same initiative can be used as a jumping off point for converging cutting-edge technology for the purpose of connecting clouds anywhere for multi-site hybrid cloud solutions.

Over the past few years, cloud computing technology has become a mainstay of nearly every significant IT project in the industry, either as the platform being used for application development and deployment or as a solution for logistical problems plaguing existing applications.

Generally, enterprises were slow to adopt the cloud, with majority of the movement in the industry consisting of SMEs migrating to the cloud or incorporating the technology into their operations. The reason for large enterprises’ slow adoption of the technology is the large amount of “legacy” applications that they depend on, which were all coded around outmoded IT architectures and required long development cycles, capital purchases, and over-provisioning in order to remain functional during peak loads. In their case, migration to the cloud would had disrupted operations and required them to discard obsolete hardware and software that cost hundreds of thousands, if not millions, of dollars. Additionally, large organizations were averse to the technology due to concerns over data privacy and security.

Now that the cloud technology has matured, many of the concerns were addressed and large organizations have started to realize that they are getting left behind by smaller companies due to the advantages provided by the cloud, such as increased flexibility, agility, streamlined business processes, and massive cost savings. Many large companies decided to accept the birth pains of migrating to the cloud, and eventually found working models for fitting cloud technology into their existing IT deployment models. 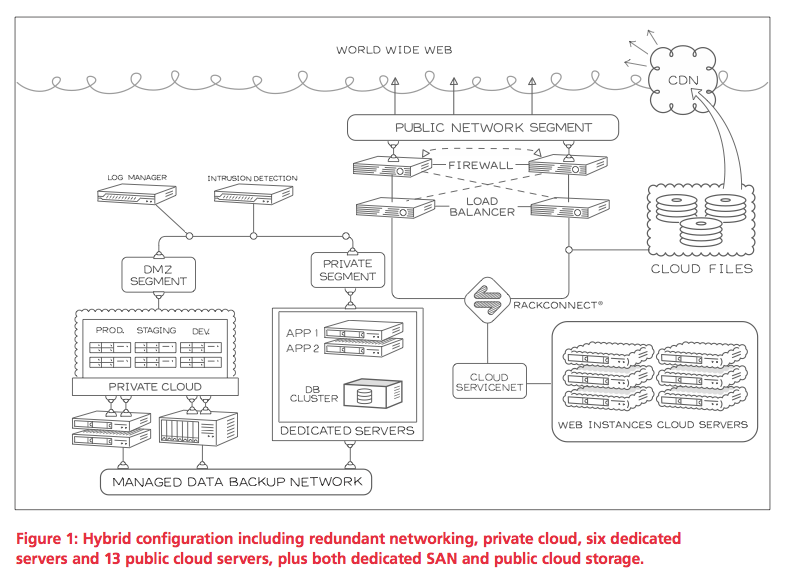 One big trend that has gained considerable momentum with these large organizations is the use of hybrid clouds, which is basically the usage of cloud from an IaaS provider alongside other platforms in order to deliver an application or workload to several users. Hybrid clouds bring a number of different advantages to enterprises, such as the ease of spinning resources up and down , and the cost efficiency of being able to pay for the capacity on an hourly or monthly basis instead of being tied down to a specific billing plan. What’s even better is that it allows for the greatest flexibility when the virtualization technology vendors started offering built in support for moving live virtual machines across a network, as it allows a straightforward means of transitioning applications and workloads between sites.

The main problem enterprises encountered with hybrid clouds is that the number of suitable use cases for a hybrid deployment is reduced once the distance between geographical locations increase. This resulted in many enterprises moving to a hybrid model, but only a few finding success.

Rackspace defines a multi-site hybrid cloud is one that involves attaching existing IT infrastructure to a public cloud provider via a private leased line or a public internet connection. The main advantage to a hybrid cloud is that it allows existing infrastructure, including legacy hardware and code that are otherwise expensive and disruptive to replace. However, this doesn’t come without a catch, as it greatly limits control over geography and may result in increased latency as distance between sites increase, not to mention includes additional time and expense meant for provisioning network connections and reliability of inter-site communication, when compared to pure cloud implementations.

There are a few obstacles that prevent enterprises from moving to a multi-site hybrid cloud model. First is the dependence of infrastructure architecture on application architecture. Many models that work on a local hybrid cloud deployment may not behave correctly – if at all – across long distances due to the sheer amount of data that needs to be passed back and forth, as well as the frequency in which they do so.

A good example of this is live motion of a virtual machine, which can work well on a local area network, where bandwidth is abundant and latency is almost nil. However, once it is tried across long distances, the latency quickly becomes an issue as the virtual machine becomes sluggish and non-responsive. The problem is exacerbated if packets are lost in transit due to unreliable communication. The solution to this problem is synchronous data replication between the two sites, which will allow the virtual machine to skip data copying and just transfer the machine configuration and memory, provided that both sites have a 1:1 copy of the VM.

Hybrid for the Metro Area

A live motion virtual machine with synchronous data replication is very powerful, as it allows a number of capabilities, such as:

Now that enterprises are demanding more and more cloud-based solutions while still being tied to tons of legacy applications and hardware, it is up to hybrid solutions like Rackspace’s RackConnect, or OpenStack and Fanatical Support to help organizations who want to integrate public cloud resources without abandoning their legacy infrastructure, allowing them to rapidly scale up applications for things such as marketing campaigns, SaaS offerings, and rich media applications for games and social media apps.

The problem with the above scenario is that technology moves forward at a rapid pace, especially with regard to the cloud. Sooner or later, organizations who cling to their legacy infrastructure will be left behind, especially as they grow big enough to span large expanses of geography. This is why there is a huge need to build hybrid clouds that can span distances and connect on-site applications with local and cloud-based resources without falling prey to latency and bandwidth issues.

Fortunately, Openstack Clouds, Rackspace, and other cloud service providers are constantly increasing their availability and their technology’s maturity, which will become the foundation for extending the benefits of a hybrid cloud to customers regardless of their geographical locations.

Another importance of a hybrid cloud that isn’t affected significantly by distance is that it can be the catalyst for the increased adoption of the cloud by enterprises, as it gets rid of the financial risks associated with cloud adoption as resulting from the abandonment of legacy applications and hardware.